How to: Fluffy vintage-looking ostrich feathers

I love big fluffy feathers on my hats.  Years ago, when I first starting making hats, I couldn't figure out why my ostrich feathers looked so sad compared to the vintage ones I found at flea markets. It couldn't be that they just made better feathers back then, could it?  Eventually, after talking to milliners, reading millinery books and carefully examining vintage feathers I figured out what I needed to do to get the feathers I wanted, and the good news is it's not that hard to go from skimpy to full!

I think the three most important things to getting great looking feathers are:
First I'll talk about purchasing feathers.  While you can buy ostrich feathers at Michael's and other craft stores they are generally the poorest quality.  It's kind of like buying wine at 7-1: not the best place for the highest quality.  That said you CAN make even craft store feathers look much better just by curling and layering.

My preferred ostrich feather dealer is ostrich.com.  They sell many other kinds of feathers but their specialty is ostrich.  If you get on their mailing list you can get emails as to when they have sales and that, my friend, is the time to buy!  Nearly all my hats' plumes are ones I got at an ostrich.com sale.  If you click the link above to ostrich.com you'll see a listing of all the ostrich feathers they currently have in stock and you'll probably notice a vast price difference between these: from 4 cents for $41- EACH!  Quality, length and color can greatly vary the price.  Male bird wing feathers are highly prized for their fluffiness, length and beauty and are priced accordingly.  Femina or female wings (which, like most birds, are not as flamboyant as their male counterparts) are cheaper.  Most of the large plumes I use are femina wings, usually second quality that I got on sale!  For smaller plumes you can use drabs, which are even cheaper.

Once you've gotten your feathers curling the barbs makes them look even more fluffy.  You need dull scissors for this, kid's craft scissors are great.  Curl the barbs in much the same way you curl wrapping ribbon - by firmly running the scissor edge along the barb.  Don't pull the barbs or they'll come out.  Just as with wrapping ribbon sometimes the curl doesn't take, keep trying.  You can curl multiple barbs at once but be careful about trying to curl too many or you may rip some out.  Expect that you will lose a few and you'll lose the barb curl if you dye your feathers or use a curling iron on them, so wait til after dying and curling before curling the barbs.  Here's a shot of two feathers of the same quality, the red one has it's fronds curled, the blue does not.

But to me the most important step to great vintage-looking feathers is layering.  I've bought a lot of vintage ostrich plumes over the years and NONE of them is only one feather.  In fact none of the ones I own are even just two feathers.  Most are 3 or more feathers sewn together to look like one plume, often with additional plumes sewn to the last 1/3 of the feather to give it more weight and fluff. 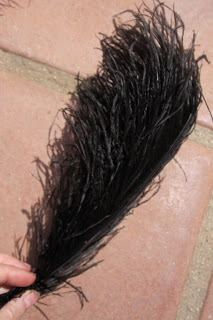 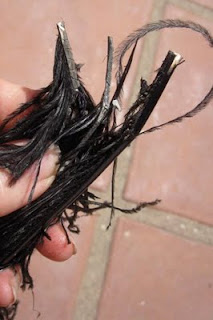 Here's a rather beat up old plume that nevertheless looks far fuller and fluffier than the red and blue feathers above.  Because it's beat up I had no problem prying it apart a bit at the shaft so you could see what I mean.  It's not one plume at all but three good quality plumes sewn together!

Before sewing the plumes into one,  you want to make sure your feathers are the same length and that you layer them to show off the best feathers.  I always put the fluffiest, fullest plume on top and the skimpier ones underneath.  Color is a consideration too since feathers are rarely uniform in how they are dyed or naturally colored.  Once you've decided the order of the feathers you need to attach them together.  You can see the stitching on the underside of this vintage feather.  Incidentally I counted SIX feathers at the very tip of this plume although there are only two shafts visible at the end. 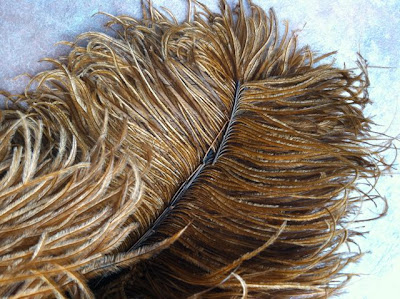 I don't know if my sewing method is exactly what they used, it's hard to see all the details of the stitches amid all the fluff of the period plumes!  But this is the method that I use - it's easy and it works.

You will need:
I usually start from the end of the shaft and work my way to the tip of the feather.  You don't need to sew through all the feathers shafts that you've stacked together, really what you're doing is wrapping the thread around the shaft.  Tie the two ends of the thread together then wrap the thread around the other feathers shafts gently pulling the barbs away from the shaft so that the thread goes in between them and holding the end of the thread.  Then thread the needle back between the two strands of thread and pull it tight.

I used white thread below so you could see it against the black feathers.  This is a group of four drabs with curled barbs sewn into one plume. 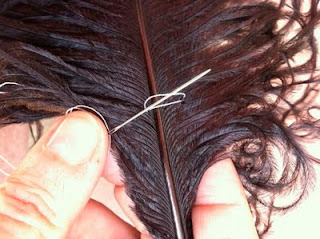 When you're done the feather should look like this:

I hope this helps you get the full and fluffy feathers you've dreamed of!
Email Post
Labels: feathers how to