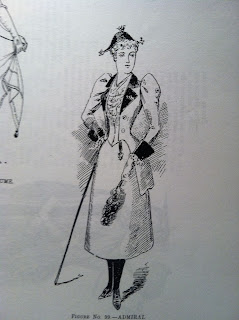 I love perchy little hats.  Not the super tiny doll-sized ones, but some of the more modest perchy little hats are just so cute.  And I'm blessed with good hat wearing-fu, if I do say so myself, so I'm a big hat collector.  Anyway, I've been sewing and brainstorming on the fancy dress costume and have decided I need a perchy little bicorn.  I've seen many tiny top hats and quite a few mini-tricorns (I've made two myself in fact) but I've never seen a mini bicorn. Most of the harlequin fancy dress images I've seen have bicorns.  And while this one from a reprint of the 1892 Masquerade and Carnival: Their Customs and Costumes isn't a harlequin, her bicorn is kinda mini and about what I was going for. Hilariously enough she's supposed to be Lord Nelson!

Last night I looked though my books for a bicorn pattern, I was sure Patterns for Costume Accessories had one, but I eventually found it in From the Neck Up.  Like some origami animals, it took me a while to grok it, but I finally did and made a paper mock up of the book's pattern at 200% enlargement which seemed about right for a mini.  I'm afraid the paper doesn't look like much but I'll take some pics of construction once I start. 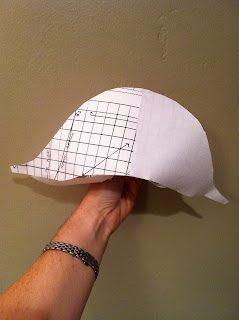 I'm wondering a bit as to how to construct it (anyone ever made one from scratch with buckram vs. blocking one in felt?) I've made a lot of hats.   But exactly how I construct them changes with materials, pattern and my whims but this is complicated enough, essentially it's a hat with a brim on top of a brim, that I think I need a plan.

In any case, the goal is a little black velvet bicorn perched at a rakish angle atop a bunch of fake hair with some pretty curls hanging down my neck.
Email Post
Labels: Fancy dress