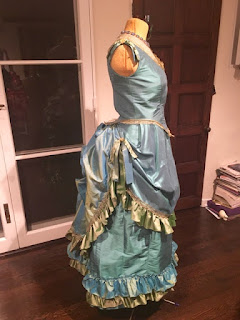 I realized I hadn't posted about my new Victorian ballgown. It was an interesting project.  I had a ball coming up and wanted to make something that was a little shorter and easier to dance in but using fabric I already had.  I thought I could cut some time out by using an underskirt I'd made for a Victorian fancy dress costume as my base.  And I had a remnant of the same fabric...but not enough for trim or skirt draperies.  What to do?  Raid the stash for other remnants and make it work!

I had some green silk left from my Lost Hope Fairy as well as some changable silk taffeta left over from another project...but again, only a little bit.  So with clever piecing I managed to get a dress out of three different fabrics.  The really hilarious part?  The front of the drape isn't the same fabric as the back! 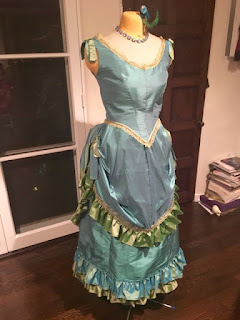 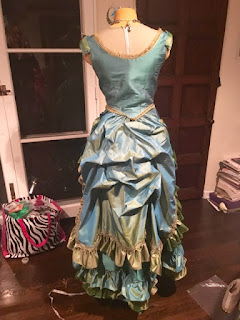 Next up: I'll edit and post my pictures from the Ball.  :)