Since I'm nearly done with the riding habit shirt I thought I'd work a bit on the hat for my Georgiana Fox riding habit.

I ordered this navy rabbit fur felt capeline for my Fox hat.  It's super cool, really furry and different from regular felt. Here is the fur felt next to a modern felt hat.  You can also see what the hat looks like untrimmed. 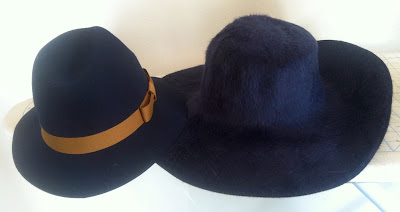 And again only close up: 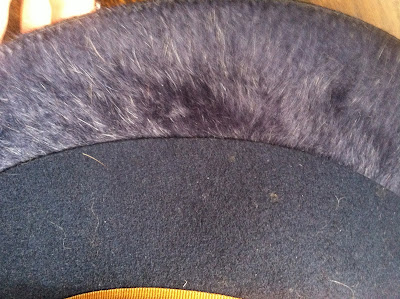 I don't really have the right hat block to shape it, but I don't really think that matters - it's so covered with foxtails and feathers you can't really see the crown of the hat and I wired the brim so it can be shaped by bending the wire. I don't have any navy feathers in the stash but I have black and white and those seemed like the most common colors anyway so I set about curling (which created a lot of fluff) and layering them to get the right plush look.  I totally was a lazy bum and just hot glued them together, which led to the tears part.  I can't seem to use a glue gun without burning the crap out of my fingers!  (And the sweat was because it's still a sauna here in SoCAL despite getting some much needed rain.) I also used the glue gun to "make" foxtails.  I had an old fox fur collar that was falling apart that I cannibalized for the fur.  I just rolled the fur strips in on themselves then hot glued them to make tails.  I think they turned out pretty well! 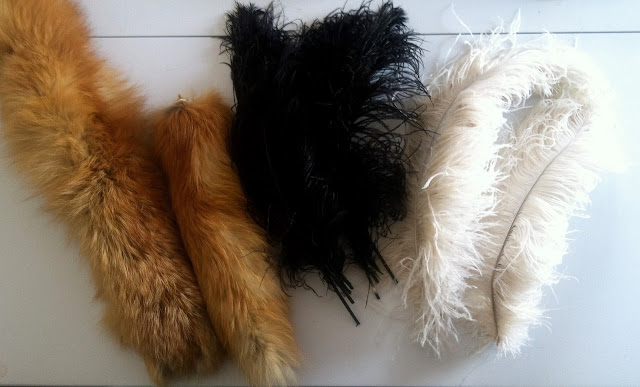 I  ordered narrow silk ribbon to cover the millinery wire on the brim edge and I have some lovely wide navy ribbon from Bulldog and Baum to go round the crown.  And so after I make the FOX cockade,  I can put the whole thing together!
Email Post
Labels: 18th C buff&blue riding habit