After getting all those bits of trimming together for the Fox habit hat yesterday I decided to start on the cockade.  In most of the political cartoons of Georgiana during the 1784 Westminster election you can see a big cockade with "FOX" emblazoned in the center.  Very similar to what they did in the movie which you can see in the photo above.

So I cut out a small piece of the silk/wool blend fabric I'm going to use for the habit vest to use for the center button of the cockade.  I found a font I thought looked nice then used a light box to trace FOX on the fabric (in a fabric marker same color as my embroidery thread). Then I just embroidered over that.

Years ago when a seamstress had been going out of business I'd bought a bunch of really huge covered button forms from her (amongst other myriad notions) so I used one of these to create the button.

Now all I need to do is make the loops to go around the button to finish the cockade. 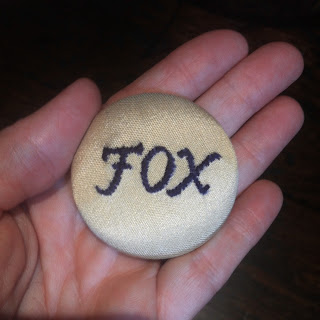