I was sad to miss the LA Day of the Dead this year but I'm excited to be going with my husband to the Krampus Ball in December!  Krampus is a strange folk figure found in many alpine  countries - mostly Austria and Germany, but also Hungary, the Czech Republic and a few others.  He's a devilish figure and servant of St. Nicholas, (there is no "Santa" in much of Europe) who whips the bad kids with willow wands.  There is a Krampusnacht where Krampuses, St. Nicholas and others parade down the street...and this year there will be all of the above in LA!  The people putting it on are going all out on their masks and are blogging about the process as they do it and that's what got me all psyched about it - I just love seeing that sort of creativity - seeing these crazy giant devilish costumes come to life. 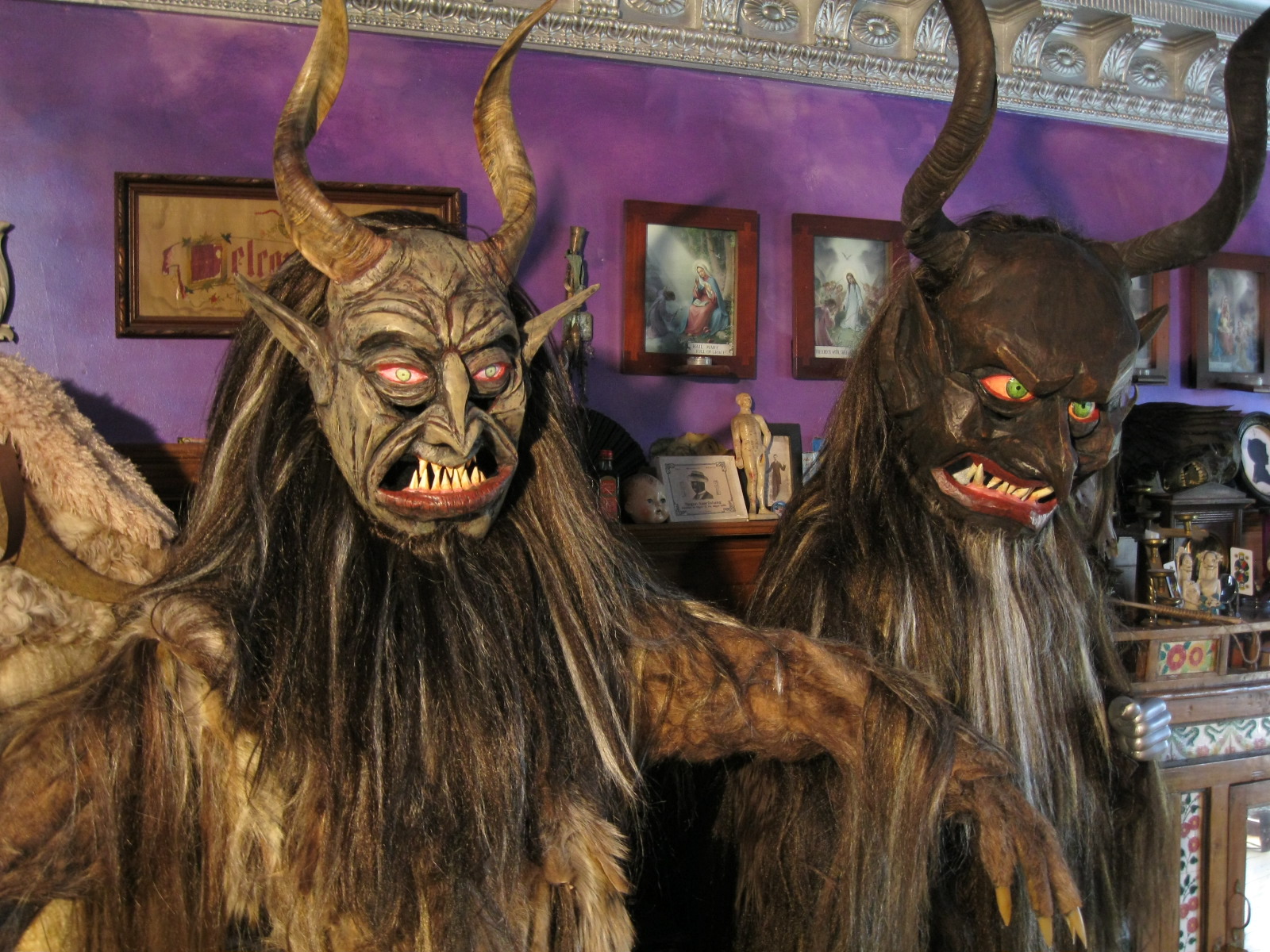 The goal is to make some Krampus costumes of our own to wear to the Krampus Run and the Krampus Rumpus.  The Krampus Ball is sooner though.  So our thought was to have some bits of the Krampus costumes together for the ball and mix those with existing costumes.  To that end I purchased a few things... including these resin cast ram's horns from etsy seller SinergieDreads. I love them, they are so nice and light!

So this weekend I got to work on my headdress for the ball and here's how it turned out (work with a nice 2/3 wig fall of hair that matches my own.)

And here's how I constructed it - the base is a basic tear shaped form of the sort you see with many cocktail hats only bigger and with holes cut out to accommodate the horns.  The form is make out of wonderflex, which is similar to buckram but much stronger.  It's basically a thermoplastic impregnated buckram - when heated it becomes flexible and can adhere to itself.

I used a heat gun to shape the wonderflex over a tinfoil covered fabric wig form and just cut and pleated it to shape.  Then when it was cool and stiff I wired the edges (but not the horn holes) with millinery wire and also attached a wire from the front point to the back.  I sewed a loop for the horn elastic to thread thru then painted the form black and dry brushed white stripes on it so that any gaps in the branches I hot glued on top of it would be less noticeable. Then hot glued TONS of "snow" and "ice" covered branches from Michaels onto the form.  It was important to use wired plastic floral stems vs natural branches because I needed to bend the wires and make them fit the curve of the base.  Straight natural branches/twigs would have just popped off.

I made small rings of fur from a ripped up fur stole I had to cover the joins between the horns and the horn holes.  I still want to monkey with these a bit, not exactly sure I like them how they are, may make them a bit more or less furry, and also need to attach them to the base.  So the horns just slip in and out of the holes and are completely separate from the headpiece.  I plan on doing something similar with the Krampus mask I'm making so the horns can be easily used with both costumes. 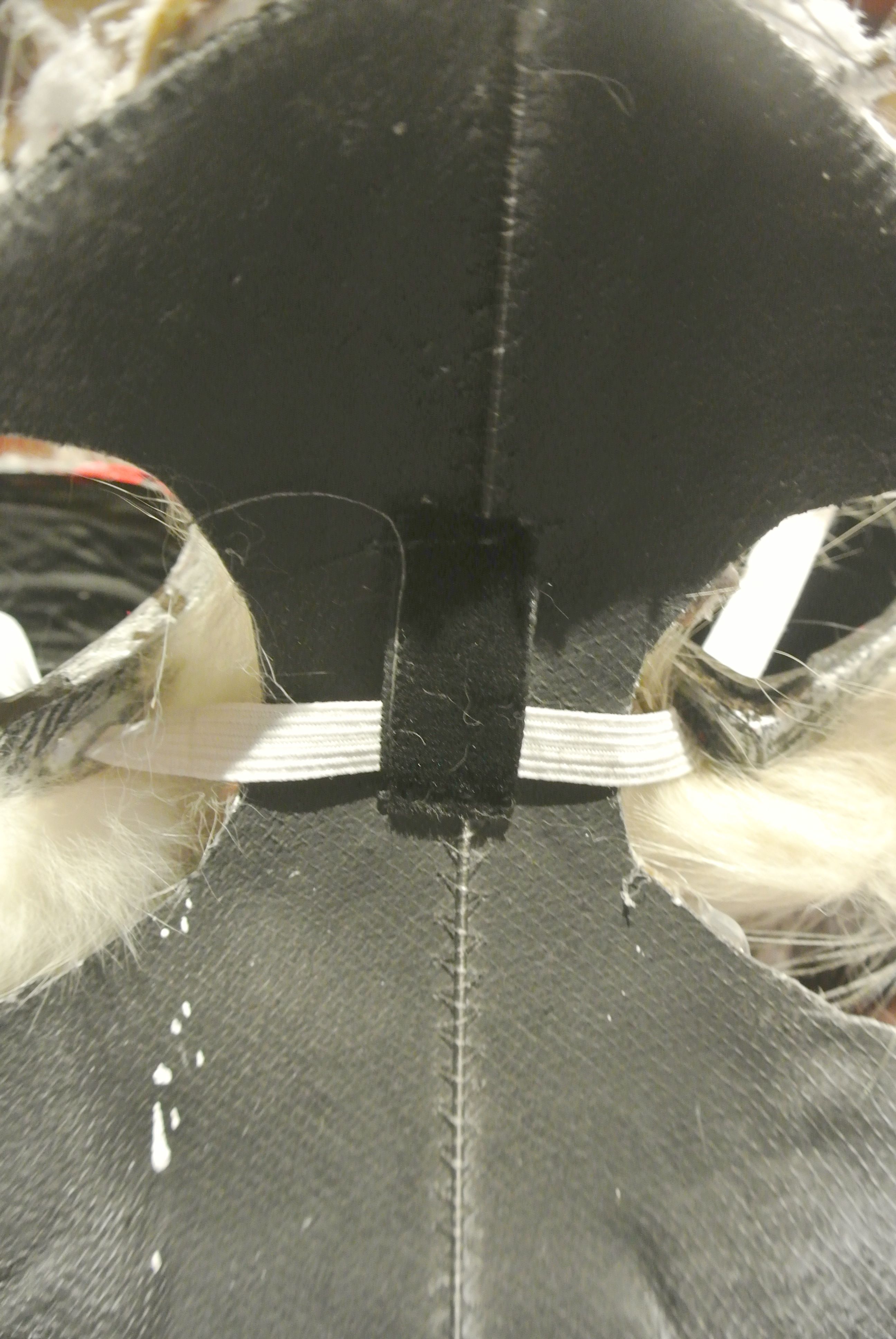 ETA - and it's a bit late but I just realized this actually fits the "masquerade" HSF challege - woo hoo!

Year: Krampus has been around since at least the late 19th Century since I've seen photos depicting him from the 1890s but my headdress is a much more modern interpretation.
Notions: Thread, Millinery Wire, hot glue, paint, "ice" and "snow" covered floral stems.
How historically accurate is it?  Not very!

First worn:  Will be worn at the Krampus Ball

Total cost: Many of the materials were in my stash but I spent $25 on floral stems and $35 on horns.