This year the boys wanted to be Adventure Time characters for Halloween - my younger son was Finn,  my older was  Jake,  I was Princess Bubblegum (in her lab coat wearing incarnation since I already have a lab coat and a pink skirt and I'm all about reusing things) and my husband was the Earl of Lemongrab.

I made a Jake hat a while ago and got a sweatshirt and pants in almost the same color.  And we already had a Finn hat, shorts and t-shirt so all I really needed to do was make the lemon head for the Lemongrabs costume, a lemon belt, Finn's backpack and Princess Bubblegum's crown.

So for October's bags and purses accessories challenge I made the Finn Backpack!  For the backpack I used a simplified version of a pattern my friend Twila drafted and was kind enough to send me.  It's made of 2 layers of fleece with a decorative button and a velcro closure.  I wanted him to be able to put stuff in it but don't plan on having anything heavy or using it like a real backpack.

I made my husband's Lemongrabs head by modifiying the hood on this wolfman costume pattern to include a long pointed nose and a lemon-y shape.  I used two layers of felt for this and wired the nose tip with millinery wire.  I bought a fake lemon from Michaels and cut it in half then hot glued it to a wide ribbon for the lemongrabs belt.  The Princess Bubblegum crown was made by cutting and shaping a piece of wonderflex to look like the crown, wiring the part that sticks up with millinery wire, painting it and gluing a gem onto it. 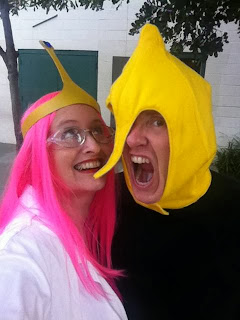