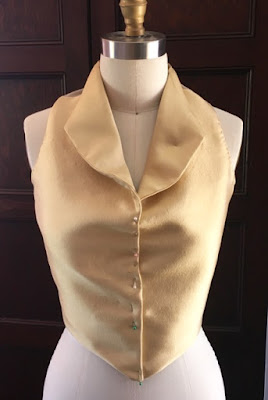 I'm nearly finished with the waistcoat for Georgiana's  Fox riding habit. All I have left to do are the eyelets on the back and the buttons and buttonholes.  But those will have to wait because I am waiting on the buttons to arrive.  I have no idea if they did this in the 18th century (and I suspect they didn't, but correct me if I'm wrong) but I wanted to get fox faced buttons for the waistcoat.  Modern, and at least some Victorian era, fox hunters often have fox faced buttons on their hunting jackets and waistcoats and I thought it would be yet another fun foxy touch to add to this costume.

The waistcoat is made of a buff colored silk/wool blend, with the back panel in natural linen and the lining in a remnant of tan silk taffeta.  Decadent lining I know, and not something thrifty Georgians would have done, but both wool and linen against my skin make me itch and my riding habit shirt is thin enough that I was afraid I'd be scratching the whole time I wore it.

Once I finish this I'll move on to the habit skirt.  I'm saving the hardest for last - the coat.
Email Post
Labels: buff&blue