So I went back and cut an inch off the ruffle for the "tostada" hat, as a friend called it.  The proportions weren't right to me and proportions are pretty important in how "right" I feel something looks.

I re-hemmed it and sewed it back onto the hat then atached the flowers and took some more pictures this time in case it might be useful for someone else.  I stitched the ruffle on quite a bit beyond the actual crown/brim join on the straw, creating the illusion of a much wider crown.  The fabric is very, very stiff and holds a crease extremely well, such that I can use my fingers to "press" it into the shape I want and it just stays.  Brilliant.  Really everything I was hoping for in a fabric for this project. 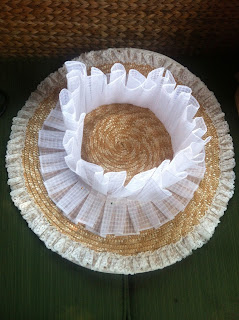 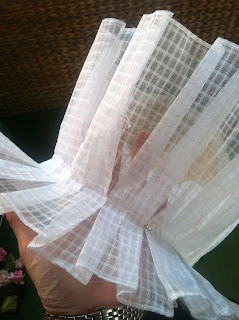 I bought quite a few fabric roses from Mary not Martha, which is conveniently just a few miles from me.  I'd bought some paper ones from Taylor of Dames a la Mode that worked very well for the crown/brim join but needed to add a few more as well as some large ones for inside the ruffle.  Mary Not Martha isn't cheap but man, do they have flowers!  I pawed through bin after bin of fabric roses, all top quality.  I can't recommend them highly enough if you're in the LA area, but they're also on etsy.

Getting the roses to stand up in the ruffle was a bit of a chore as the crown is a typical very shallow bergere style.  But I had the idea of creating a sort of wire stand for the flowers to elevate them, just some more wire wrapped around the end of the stems and bent into a sort of loop that I then stitched down to the crown.  This is a bit delicate but I think the hat looks delicate and something sturdier wouldn't look right. 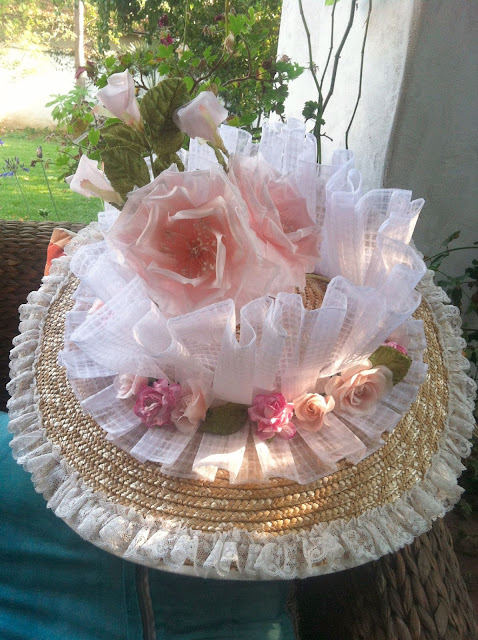 And so I'm done! Now to make the dress to go with it!  ;)
Email Post
Labels: 18th C hsf millinery