This project was a long time in coming but it took a tad longer even than I'd thought.  Many costumers seem to have one wacky costume thing they've got on the bucket list.  You know, that crazy, style of dress or silly hat that you kinda can't believe was popular in ANY era.  Well, this is mine. Ever since I first set eyes on this fashion plate I'd wanted to reproduce this hat. 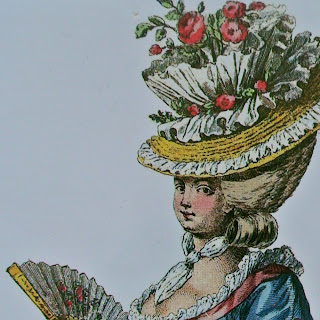 It was both easier and harder than I thought it would be.  I quickly decided that box pleats would create the type of undulation I wanted in the ruffles of the crown and the brim but I had a hard time finding fabric that was stiff enough to stand up to the challenge.  I tried organza alone, lined with netting and sewn to an interior support.  None of it worked.  Then I remembered that Pure Silks had some organdy other costumers had liked, so I ordered a bit and it was perfect! 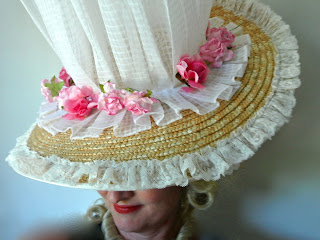 I cut two rectangles with width of the fabric and 10 long, sewed them into a tube and did a narrow hem on the top on bottom.  I box pleated the strip stitching it along the pinned box pleats 3 inches from the edge then hand stitched the box pleated tube to the hat.  I also wired the straw brim of the hat, sewed a bias strip of off white silk dupioni over the wire and topped it with a gathered strip of lace.  I may monkey with the crown ruffles a bit but I'm pretty happy with it. 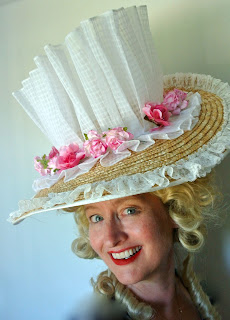 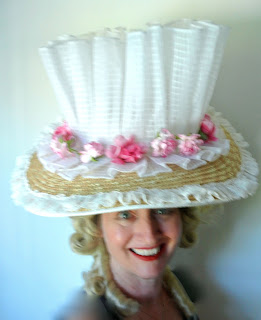 In the other examples of this hat I've seen in fashion plates the edge between brim and crown is trimmed in flowers or by twisted ribbon.  I plan on trimming it with the fabric and paper flowers shown and getting some large roses from Mary Not Martha,which is conveniently close to me, to fill the crown, to fill the ruffled crown like in the fashion plate.

Pattern: None, two 45 inch x 10 inch rectangles sewn together into a tube with the outside edges narrow hemmed.

How historically accurate is it? The style is fairly accurate, the construction only somewhat. It's based on hats called variously Chapeau a la Turque, Chapeau à la Grenade or a la champignon in fashion plates in the Galerie des Modes, 1779-1780. The base is a commercial straw hat that is machine sewn together and I wired the edge and sewed the bias strip on the hat via machine.

First worn: Hopefully to be worn at Costume College in August

Total cost: $7.00 for the organdy and $9.00 for the paper flowers, the straw base, thread, lace and fabric flowers came from the stash.  I hope to add some more flowers to the top of the hat.
Email Post
Labels: 18th C hsf millinery