After a long hard look at the calendar I came to the conclusion that I needed to reshuffle my sewing priorities to better fit the deadlines I've got coming up.  This means I'll be wearing a "this old thing" to the upcoming Impressionists' Picnic instead of my Tissot gown - I just have too much to do on our costumes for the upcoming Myth Masque to ensure I could get everything done in time.  But thankfully I have several fun bustle gowns in the closet.  I've decided to reprise my black and white dotty bustle gown, probably because it reminds me of this gown that was featured in the Met's recent Impressionism exhibit.

But the hat I wore last time has been re-trimmed to go with another gown and was only a stop gap anyway since it was more of a winter hat, being felt.  So I dug out a black straw hat blank from my stash that I'd purchased from Truly Victorian a while back and got to work.  I had only a scant few scraps of the polka dotted ribbon I used to trim the original dress left, but it was enough to carefully piece together a bow.  I also had some scraps of pleated organza and pleated grosgrain left over from trimming the gown that I trimmed the edge of the hat with.  Finally I added some white dotted millinery netting which I thought nicely echoed the dots in the dress. And Voila - my new hat! 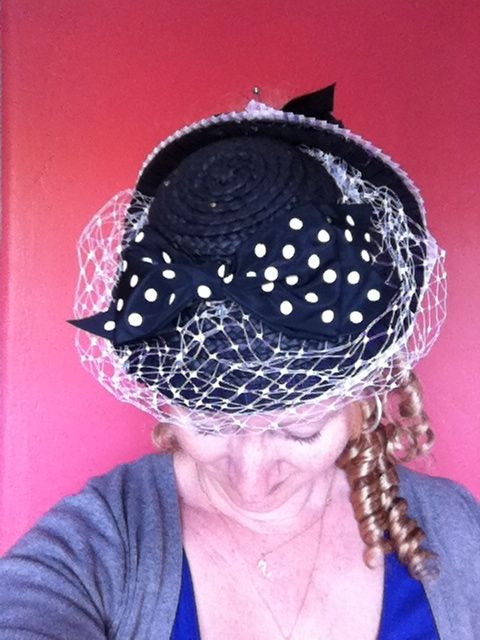 I also decided to add a few new trimmings to my dress.  I've found I'm much more enthusiastic about an old standby if I can refurbish it a bit and make it seem "new."  So I'm adding some of the narrow pleated organza ribbon to the vestee at the bust line and adding some wide pleated organza (that ironically I bought for the Tissot dress but am not using because it's too white) to the under sleeves.  Pictures to come once I got to the event!
Email Post
Labels: 1870s dotty bustle hats