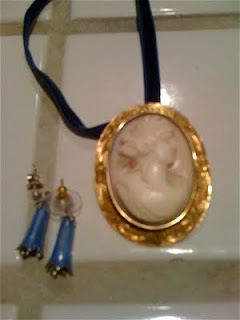 I thought I'd post a few pictures of the accessories I wore with the seaside gown since there was some interest in them. I don't recall where I got the bluebell earrings but the cameo has a bit of a story behind it.  I don't remember seeing my grandmother or great grandmother ever wear it but my aunt said she wore it on a velvet ribbon quite a bit in the 70s when the Gunne Sax version of Victoriana was popular. My mother found it amongst my grandmother's things when she died and gave it to me.  She told me that it had belonged to my great-grandmother Laura (who I am sort of named for) who was born in 1895, and it may well have belonged to her mother. Sorry the picture is so blurry, all I had time with was a cruddy iphone pic! 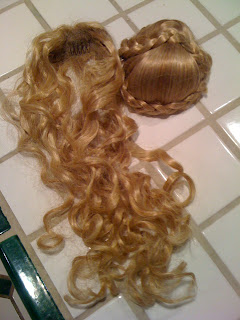 These are the two hairpieces I wore.  The big braids on the bun I added from the jaw-clip switch I'd bought  and the curly part is the remaining big of from the jaw-clip switch that I curled.  You can just barely see the comb at the top.  I used the comb and bobby pins to attach the long curly piece to the bottom of the bun of my own hair, the put the fake bun over the whole thing.
Email Post
Labels: 1870s accessories bustle hair jewelry seaside