A little digression from all the mantua madness... 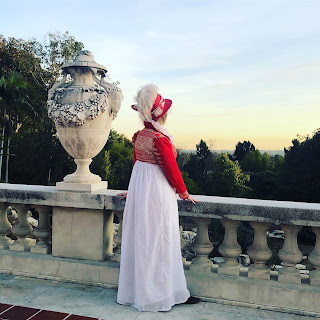 I go to a Jane Austen ball every year around this time and always like to have something new.  I didn't really have any plans for a new gown, but I'd bought a hand-embroidered red wool Pashmina shawl a while back on etsy that made me think some of the military-esque looking spencers of the period.  So, with just a few weeks before the event I thought I'd see what I could do to make that happen.

This was a bit of a challenge, as the pashmina had an embroidered border and two large ASYMMETRICAL but very similar bands of embroidery on either end.  I pondered layouts for days, both in my head and placing the actual pattern pieces, to see what would work.  Finally, when I had a design I liked, I cut it out.  Because it was so difficult to pattern match I actually cut out each piece individually, being very careful to make sure I mirrored them and didn't cut two of the same side.

After cutting out the first center front piece I realized the placement of the pattern was going to look very odd.  So I had to brainstorm even more to manage to get two fronts out of it AND have the pattern look but symmetrical and flattering. In the end I did a lot of piecing.  Both center fronts are pieced and not cut according to grain lines.  The upper and under collar are also pieced.


I wanted to use a scrap of off while silk fabric for the lining and had to piece that too to make it work!  But piecing is perfectly period and I think it was worth it to ensure the sides were mirrored and to have the pattern run the way I wanted it.

I like the look of it enough that I'm already thinking of trying this again in another color, one can never have too many spencers!