As I said, I'm hands on learner.  Since I'm not yet ready to do much on the actual mantua I decided to work on the fontange.

I scaled up the two fontange patterns in the Evolution of Fashion and went to work.  The first experiment was basically a silk organza cap with cotton organdy covered in silk organza pleated tiers of ruffles.  I opted to only do two tiers not three and was fairly happy with it at first... 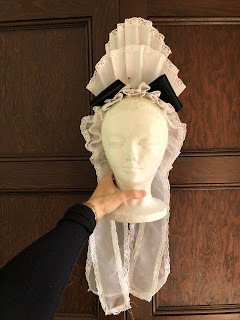 But I liked the idea of lace tiers so I covered the first experiment with some cotton lace in the stash.  I wasn't totally happy with this either, the whole thing felt way too clunky and heavy when I wanted a lighter, fluffier feeling.  I also didn't care for the more boxy look of this one.  Although I will note that I think lace on it's own that was were wired so the ruffles stood up could look pretty nice. 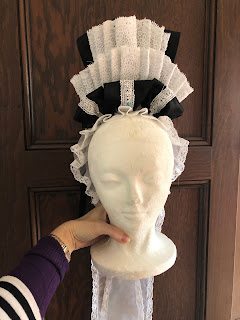 Finally I decided to go a different direction and drafted my own ruffle tiers and made a third option out of ruffled silk organza.  So far I like this one the best.  it is as tall as the other two but it has a lighter feeling I like.  The ruffles are not still enough to stand up on their own but I wired some ribbons which I added to the back and this helps the fontange stay perky. 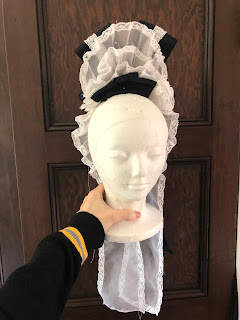 The bows in all of these experiments are just pinned in and may be placed differently in the end.

I think I may do yet another iteration of this, I have to admit I've enjoyed these experiments, and after looking at even more fontange examples I have some more ideas as to how to go about this.  But of these three I'm thinking I like version 3 best.