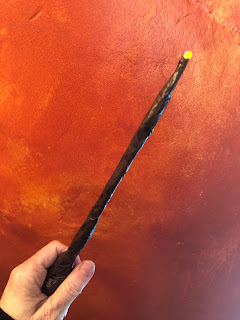 I know, it's been a long, long time... (hangs head) Between life being uh, life, and issues with my computer and resulting photo storage, I just couldn't get myself to blog.  But the computer stuff seems to be straightened out (knock on wood) and my photos are finally accessible.  So I thought I'd start out and do a post on some light up wands we just made for the opening of the new Fantastic Beasts movie.

I'd seen quite a few good wand tutorials online and thought the wands could only be better if they lit up.  My husband is the electronics and 3D printing expert in the family so I told him about my plan and with his help and the purchase of a few pieces on Amazon we got started.  Note, while this is not really a project for small kids, this is a fun project for older kids/teens and a good beginning project for anyone wanting to learn more about electronics.

Step one was hot gluing the chopstick to the battery pack.  We centered each chopstick and as the glue hardened added more glue along the base to build it up a bit.  Then we stripped about an inch of the plastic off the battery wires. 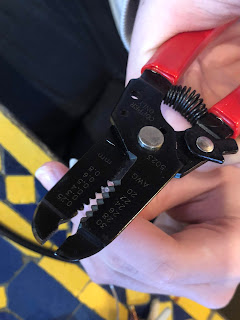 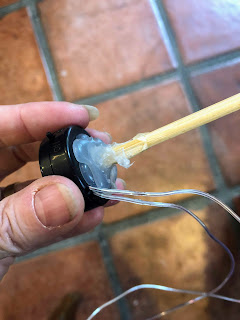 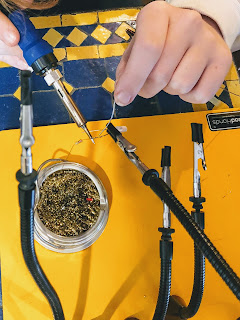 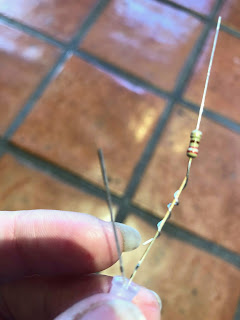 Then we twisted the wires of the battery pack to the LED wires, making sure to match the marked wires, and soldered them together.  Then we turned them on to see if they worked, and guess what, 2 didn't!  Don't worry if you mess up too, you can unsolder the wires and redo it.  Finally we covered the bare wires with a bit of electrical tape.

Once everything was soldiered together and tested it was time to put the wand together.  We stuck the LED onto the tip of the chopstick and wrapped the wires around the length of the chopstick.  Then we took masking tape and wrapped it around the chopstick to cover the wires and build up our wands.  Make sure to not cover over the end if you want to be able to replace your batteries.  You can be a little creative here and make it look more rough and twig-like or smooth as you desire. 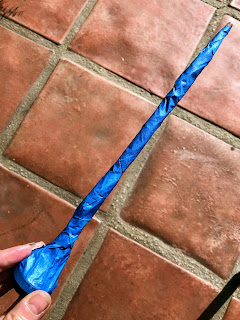 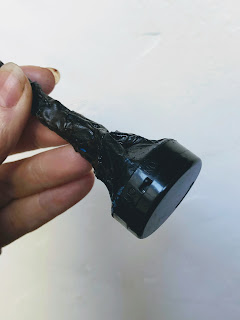 Then we masked off the LEDs at the tip of the wands and spray painted them with a base coat of black.  We dry brushed shades of brown acrylic paint over that, then did another dry brush of interference (iridescent) paint and finally sprayed the wand with a coat of Mod Podge clear gloss to seal it. 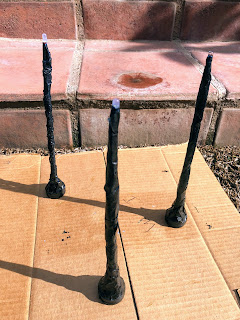 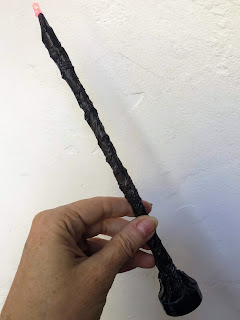 Both Adafruit and Evil Mad Scientist  are great sites for purchasing components, and they also have helpful blog and video how to's on using electronics.  And many of the components are small and cheap making them great stocking stuffers!

Check out the awesome flickering action in the video here: Lumos!