Getting ready for costume college

Wow. It's been an awfully long time since I posted!  I've been busy with family and have actually been sewing quite a bit, but for some reason I hadn't been able to get myself to write about it.  So I thought I'd just make myself write something small to get back in the swing of things...

There is a group planning on wearing suffragette attire for the Ice Cream social at Costume College.  I'd originally been working on a teens are outfit but it just wasn't coming together the way I wanted it to so I decided to finish a 1903-5ish outfit I'd had on the back burner.

The outfit is a pink and black plaid with a black shirtwaist but I'm going to share the hat first.

I used the "Belle Epoque" Lynn McMaster's hat pattern.  I meant to make the red hat shown on the cover of the pattern but I was nearly done when I realized I'd mistakenly cut a wider brim.  I think it turned out ok anyway.  It's 2 layers of buckram mulled with flannel, wired and covered in silk taffeta. I decorated it with a giant bow made of more of the silk taffeta, vintage pale pink ostrich plumes and modern black ones (tripled layered!) 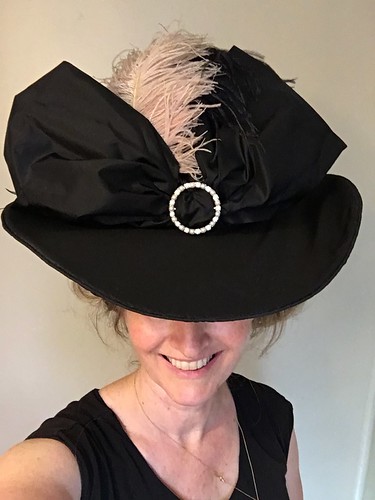 Speaking of suffragettes I also had some badge ribbons made to hand out at the convention - in white with purple lettering. 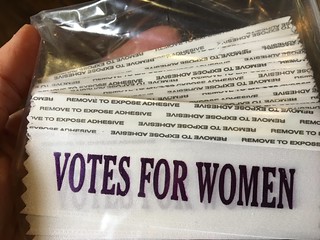 Are you getting ready for costume college too?
Email Post
Labels: coco gibson girl hats suffragette