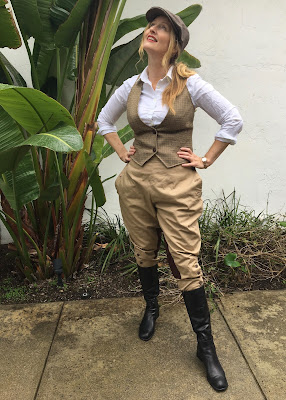 I'm a little late in posting this.  Although I finished a while ago, I just hadn't had time to get some pictures taken.  I became sort of enamored of the new "Miss Fisher" jodhpur pattern Butterick had come out with and decided I need a pair myself!

I thought it was a pretty good pattern,  it looks dead on the outfit Miss Fisher wears and is fairly similar to many of the early 20th C women's jodhpurs I've found.

The waist is pretty high for modern ladies but again, I don't think that was all that uncommon for the time.  And of course this hips are MASSIVE!  You can get a good idea of how large in the photo below.  Ironically I've seen a lot of women in 20's era jodhpurs with even wider hip flares! 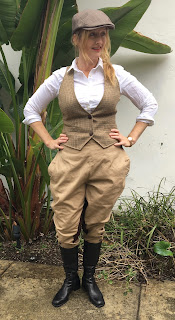 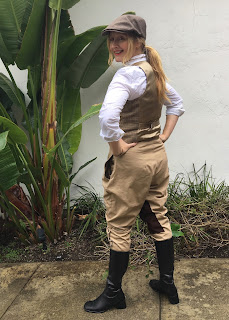 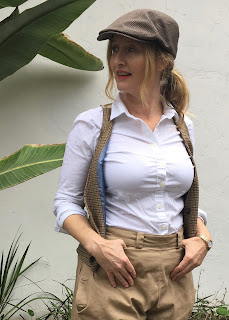 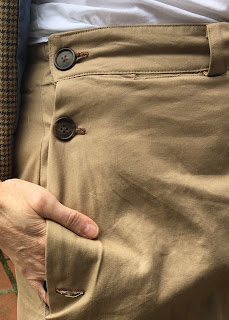 A the little "V" in the center front back.  There is a fair amount of shaping done to keep this fairly fitted.  I was between sizes measurement wise and sized up.  I think if I made these again I'd chose a stretch twill and size down for an even better fit. 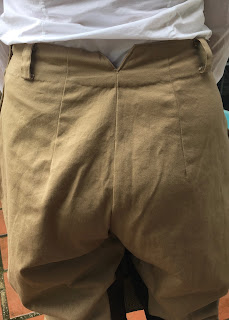 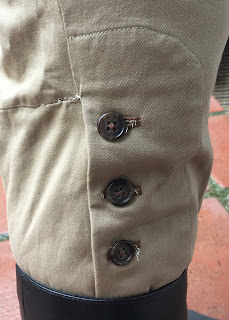 The Challenge: Firsts and Lasts.  This is the first piece of a "Miss Fisher" inspired equestrian ensemble I plan on making. While I threw a few things together for this photo shoot I plan on making a 20s jacket and blouse to go with it.
Material: Cotton twill and ultra suede
Pattern: Butterick B6433
Year: 19teens/1920s.  The Miss Fisher series is set in the 20s but these looked a little more like the teens jodhpurs I've seen.
Notions: Buttons, thread.
How historically accurate is it?  70%?  Most period jodhpurs I've seen were made of wool twill and would have had real suede patches, but I'm allergic to wool and wanted something washable and a little cooler for the LA weather.
Hours to complete:  Sorry, I don't keep track of things like that.
First worn:  Today!  I plan on wearing the whole outfit during the day one day at Costume College this summer.  Anyone else interested in joining me in wearing "Miss Fisher" for Costume College?
Total cost: Twill $18, Ultrasuede $15, Buttons $10 - $43 total.
Email Post
Labels: 1920s jodhpurs miss fisher