Getting ready to ride... 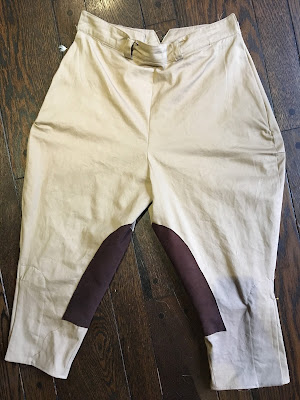 I'm making progress on my Miss Fisher inspired jodhpurs.  I need to do a bunch of hand-sewing of little things like the belt loops and facings, and then I need to do the buttons and buttonholes  -- and I'm done!

It's a pretty nice, well-fitting pattern.  Often, with the big commercial patterns. there is just oceans of ease but this pattern actually runs true to size.

Because I live in Southern California I made my jodhpurs out of cotton twill and ultra-suede so they would be both cool and washable. But if you wanted to be more historically accurate you could use wool twill and real suede.

The hip flares could even be larger if you want. Many of the photos I found of ladies in riding habits in the 1920s had even more of a flare on the sides. Also most of the 20s examples I found had two small diagonal pockets in front instead of the straight across ones hidden in the waistband seam of this pattern.
Nevertheless they look very close to the ones in Miss fisher.  This pattern actually looks most similar to this 1910s era pair of jodhpurs and this 1920s pair.  Because jodhpurs didn't change all that much in the early part of the 20th century, if I'm not too picky about historical accuracy, I think I could get away with wearing these from the 1910s to the 1930s if I just switched out different jackets, shirts, hair and hats!


Into jodhpurs?  Check out this article on the Pattern Vault blog for a nice overview of equestrian wear patterns in the 20th century and this pinterest link for more historic pictures of jodhpurs.