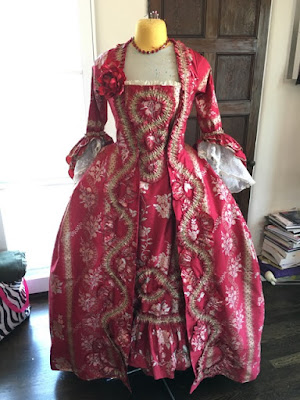 So you may remember the red française I posted an in progress photo of a while back?

Well, I've finally finished it and it's actually my first française!  As much as I love the 18th Century I tend to stay mostly in the 1780s and 1790s, and to be honest I've always been kind of afraid of the francaise.  But when I bought this painted silk years ago it just seemed perfect for a Francaise, so I finally bit the bullet and made one.

My inspiration for this gown is this red gown worn by Glenn Close in Dangerous Liaisons and this extant gown.

Pattern: I used the JP Ryan pet-en-a'air/française pattern as my base for this gown.  A.J.s blog post on this pattern was invaluable as was the wonderful draping directions of Katherine's.  I also often referenced the posts and photos Merja took of her Robe a la française.  Thanks so much for sharing your processes ladies, I couldn't have done it without you!

Year: 1770s
Notions: I used some gold braid from the stash to trim the gown as well as copious amounts of self fabric carefully cut to highlight certain motifs in the fabric.  The engageantes are made from a remnant of embroidered silk organza with an applied lace edging. 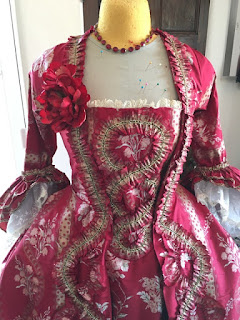 How historically accurate is it?  Fairly HA.  The lining, some of the long seams of the gown and the gathering on the ruffles are machine sewn but most of the rest of the gown is hand sewn. I didn't have a punch but instead used a pair of scalloped scissors to cut out the trim, similar to these.
Hours to complete:  Hard to say, I started this sometime in February but have also been working on many other projects.
First worn: I haven't worn it yet.
Total cost:  This is the best part, would you believe this fabric was less than $5 per yard?!  I got this back in 2009 at a big fabric warehouse in Houston that is no longer in business.  It was originally $9.95 but was on sale for 50% off.  I have some fabric left over but I think I used 8 yards for this project - so $40!!  Not sure how much I paid for the gold trim or the organza.
But where, you may ask, are the holes?!  There are a lot of holes actually, but the holes in this gown are all behind the scenes in the form of hand sewn eyelets on the front underneath the stomacher and on the back under the pleats. 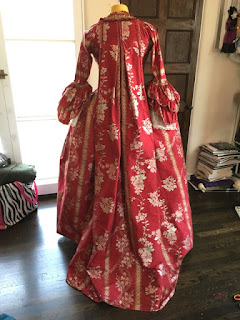 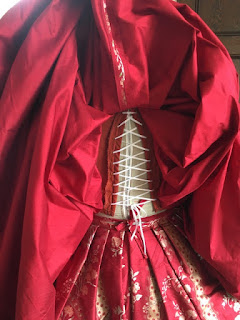 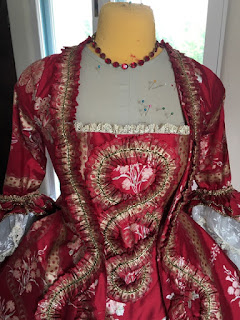 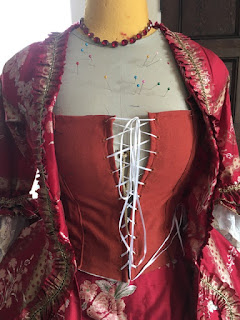 I was originally just going to do the back lacing but I felt like it would put too much stress on my pretty silk to just be tightly pinned in the front so I went with JP Ryan's method which included a front laced panel under the stomacher.  All the stress to keep the dress fitted to my body is then put on the linen lining instead of the silk.

I guess one could argue I also have "holes" in the serpentine designs of the trim on the dress and petticoat! 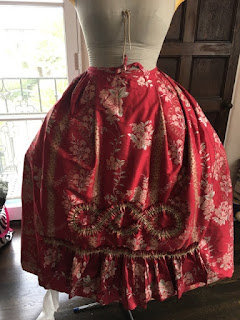 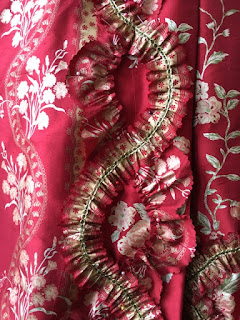