WonderCon part 1 - what we wore

Well it's the first day of April and I'm finally posting again!  I'll try not to let things go so very long in the future.

One of the things that was been keeping me busy was WonderCon.  I went with my younger child and we had so much fun!  I've generally been more into historic costume than cosplay but when you've got a 12 year old who's into gaming, sci fi and comics you roll with the punches.

She really wanted to cosplay a character from the Steam game Undertale.  Aside from her playing it I'd never heard of it before but she assured me it was very popular and she was proved right when we got to the con and found many other fans and kids cosplaying characters from the game.  The cool part was she came up with and made nearly the whole cosplay himself!

"Flowey" is a crazy, semi-evil flower in the game that's always making faces.  So she put modge-podge in a cup with some dirt, stuck a pipe-cleaner in it and glued a flower to that.  She made a bunch of different faces for Flowey with magnets on the back so she could swap them out periodically. 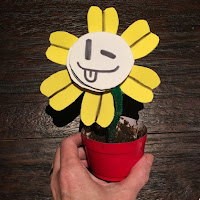 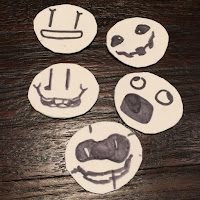 I helped her sew some stripes on a blue sweat shirt and glued the signs she printed out onto cardstock which she attached to sticks for the signs.  And she used legos to make a heart necklace that her character Frisk wears.  She even sprayed her blond hair brown to match the character's hair.
I was so proud!

The next day we went fantasy, me in my blue birds Cersei gown from Game of Thrones and her as Link from Legend of Zelda.  These were oldies but goodies for us, fun to wear but not as exciting as what we wore later simply by way of not being new. 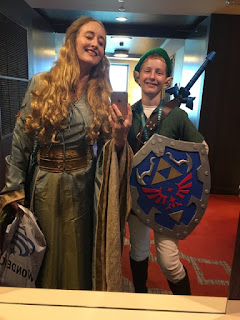 Saturday night we got out our newest costumes from the video game Portal.  She as Chell and I was a scientist from Aperture.  In the game Chell wears "longfall boots" like this:  But I didn't think the modded high heel boots I'd seen other cosplayers do would work all that well for a 12 year old boy walking around at a con.  So I got some basic cosplay boots and cut and painted them, added elastic straps in the front and used worbla to make the "springs" in the back. 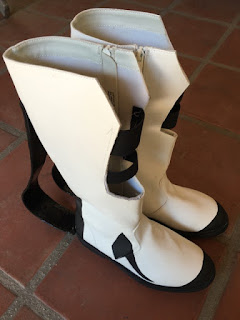 I wore an Aperture tank top and a labcoat, made myself an official looking badge and made a fake cake using a foam cake form, rice crispies, spray paint, caulk and fake cherries.  "The Cake is a Lie" is a phrase that's repeated over in the game and we knew other Portal players would really get a kick out of realistic looking Portal cake.

People were very into the cake and couldn't believe it wasn't real. After a long day at the con it was looking kind of good to us too! 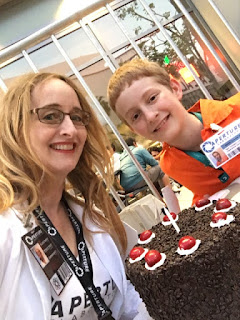