My kid wants to be a test subject from Portal for one of her cosplays at Wonder Con this year.  I'd modded a jumpsuit for her ages ago but it's WAY too small now so we're on to round 2.  I'm going to do the same stuff I did with the first one but may add some pockets or white detailing like Chell's.

We're also going to try our hand at modding some boots to be "Long Fall Boots"  Given she's unused to heels AND Wonder Con is a lot of walking we're going to start with a cosplay boot and go from there.  I thought this portal cosplay was pretty similar to what we might try to make.

I wanted to do something to go with her costume but wasn't up to trying to build something hard like a turret or a companion cube.  So I thought I'd just go as an Aperture scientist.  We got out our jumpsuit and labcoat and had fun posing for ID pics then J, who is a whiz with GIMP, whipped up some ID badges for us. 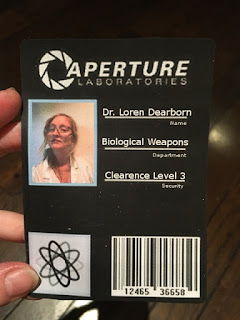 I already have a lab coat I can wear, now I have the ID, the only thing left is....a CAKE!!  I saw this instructable on making a cake prop from the game and I thought it would be too funny to pass up. While it's a great Instructable I thought it was a bit silly to make a real cake for something that would be a prop, so I skipped the cake making part and just bought a foam cake shape from Michaels.  Then followed the rest of his instructions and voila - CAKE (is a lie)! 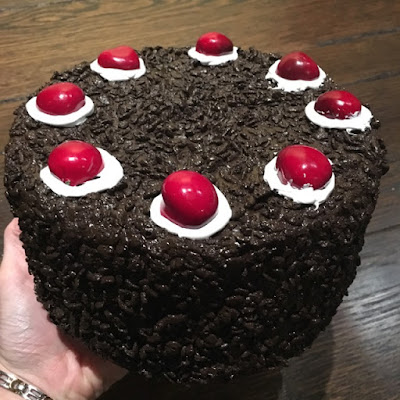