And now for something completely different...

For those who don't know I have two kids, ages 9 and 12.  And their current obsession is Adventure Time.  It's a very silly show with enough adult humor that even we parents like it.  So we've decided to do a family Halloween costume this year all based on Adventure Time characters.  My youngest claimed Finn the Human and since her school had cheap Finn hats as part of a fundraiser I got her one.  She's been wearing it nonstop ever since.

But my poor 12 year old has been left out, so today I finally made him a Jake the Dog hat.  I used the pattern from this Finn hat instructable as a base but added Jake's ears, eyes and muzzle.  I used this large image of his face for a template and then enlarged it 160% on the copier to get the size right. And I stuffed a tiny bit of batting in his nose and muzzle to give them a bit of 3 dimensionality. 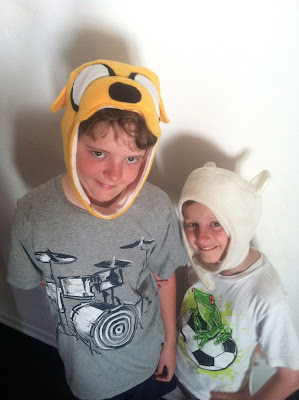 And, in case you're curious, my husband is going to be the Ice King and I think I'm going to be the lab-coated version of Princess Bubblegum because I'm a science-loving girl - and it saves me having to make PB's dress!  ;)
Email Post
Labels: halloween kid's costumes