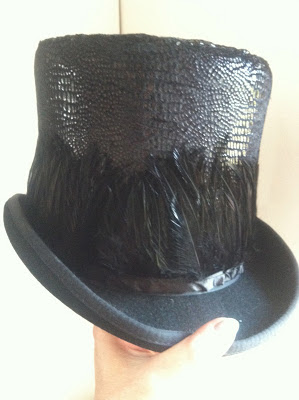 I've finished the modifications I made to my husband's top hat for our Myth Masque costume the other day.  I started with a base top hat like this.  We wanted to mod the hat but have all the mods be reversable, so no hot glue (which I generally avoid with hats anyway because I tend to retrim my hats to go with new outfits) and no cutting of the felt.  First I cut the threads tacking down the hat band and removed it.  Then I cut a tip and crown of the black scale embossed stretch velvet and sewed them together then pulled them down over the existing crown, kind of like a sock over a foot! Then I cut a strip of the feather trim to go around the crown where the band had been and stitched it in place and voila!

(p.s. I thought about covering the brim as well but my husband liked the contrast between the plain brim and the crazy decorated crown. )