I'm nearly done with the eyelet but the siren's call of other projects has been hard to resist...as per usual my eye is caught by all the pretty shiny things my friends are sewing and like a lemming - I want to sew THAT now too!
(Or, if I'm really being honest, I WANT that now too and would happily have the sewing mice do all the work...)

Anyway, next on the docket after the eyelet is a little haitus from actually working on costumes and an effort to catch this blog up on the costume gallery. I'll be away during spring break and think this would be a perfect time to fill in some of those blanks. 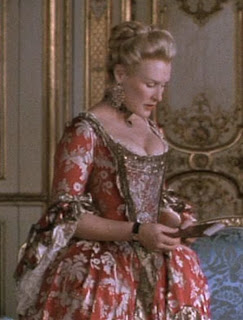 When I get back I'll work on a long-unfinished costume - a pink Venetian I think I started about a year ago. I've got a camica that's nearly done, a skirt that's cartridge pleated, and a 1/2 finished bodice and sleeves, I think I really must finish in in time for Faire season this year!

And after that I'd really love to work on a long planned project - my version of the Marquise de Merteuil's red sac from Dangerous Liaisons. I'm not sure yet it this will be a straight repro or more in-the-style of. I've actually never made a sac and if truth be told am a little intimidated by the idea. But the painted dupioni I got in Houston last year is nearly perfect for it and I've wanted this gown for an awfully long time.  I've got more to say on this costume so think I'll do another post on later on with some more in screen shots and analysis.
Email Post
Labels: blogging pink venetian red sac