Off to see the wizard

Wow, long time no post!  First I was sick, then I was catching up from being sick and now I'm in the family Halloween costuming crush, so not much time for my historic costumes these days, that should be changing soon though.

In the meantime my husband and I got invited to a Halloween party for his triathlon club on Sunday and decided to go at rather the last minute.  He dug out his old Tinman costume as a sort of joke as in "it's the closest thing I'll get to an Iron Man."    And he looked so good!  He made this costume out of aluminum duct work pieces for Costume Con 14 in Seattle in 1996.  They had an Emerald City theme so he went as the Tinman and I went as Ozma.  We wore them again for the Fairy Tale Ball the Greater Bay Area Costumer's Guild had in 1996 - and his costume has been in a box in the the basement ever since!  He even made a special "Tin Man" medal to wear with it.  The club loved it. My Ozma costume has long since disappeared so I got a cheesy Dorothy costume from the Halloween Store (for 40% off since the zipper was broken - woo hoo!)  In addition to putting in a new zipper I added some white eyelet lace at the bottom, got out a tiny little picnic basket for my purse and wore my red platform Jeffrey Campbell shoes.  Which meant we BOTH had a hard time walking, lol.  We both had a lot of fun and got a lot of compliments.  And for once HE wore the costume that was hard to drive in! 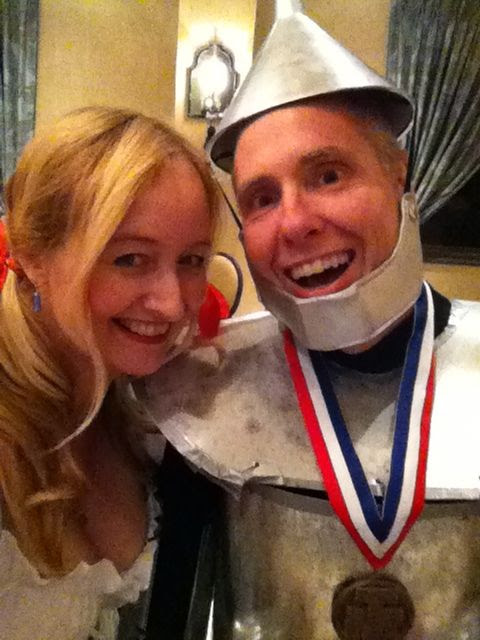